Haemophilia Care and Treatment 2016 – Day One

The conference had representatives of the World Federation of Hemophilia, United States of America. Also medical doctors (paediatricians & haematologists) and nurses from over thirteen (13) facilities in Nigeria. All geo-political zones were represented. 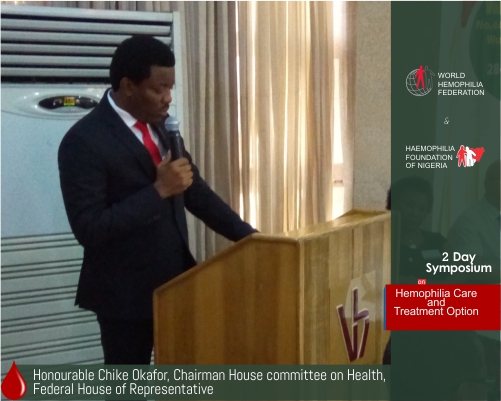 The Honourable Chairman declared the conference open and he thanked the foundation for letting him become a part of the event. He acknowledged the selfless service and efforts of the Executive Director, HFN and promised support from the legislative for the bleeding disorder community.

This was followed by an address by Dr Mike Omotosho, a board member of the Haemophilia Foundation of Nigeria, who stressed the need to take up advocacy for bleeding disorder. 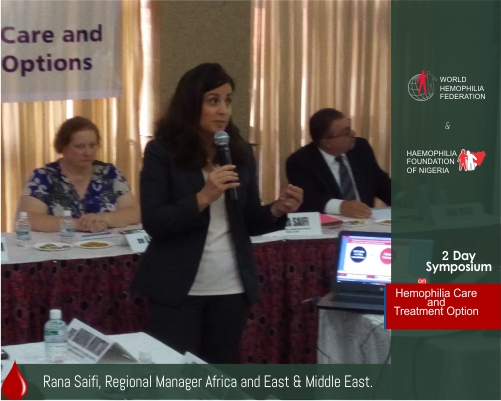 The World Federation of Haemophilia (WFH) Regional Manager for Africa & Middle East, Rana Safi began the symposium with an overview of the role of WFH in Nigeria and the various areas of support ranging from strengthened advocacy, awareness creation and increased access to treatment products through the provision of clotting factor. 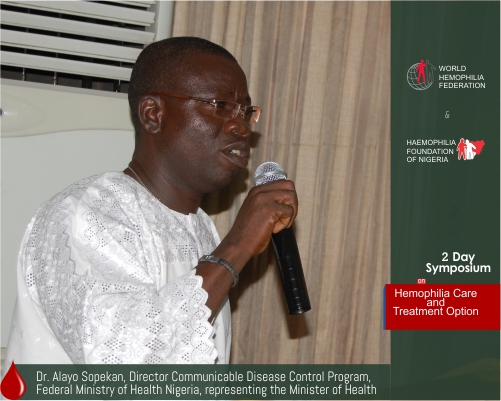 Further into the conference, Dr Alayo Sopekan gave an address on behalf of the Minister for health and promised to support Haemophilia Foundation of Nigeria by partnering with HFN&WFH to promote public awareness and generation of data. The executive director HFN, Mrs Buckie Megan Adediran responded by appreciating the pledge to support the course of improving the quality of life for people with haemophilia. She further stated that several efforts have been made to get the support of the Ministry, but had been given promises which were never fulfilled. She stressed the need for importance of tackling the condition just like Sickle Cell, and that one of the steps would be the provision of a desk officer within the Federal Ministry of Health who would respond to bleeding disorder. 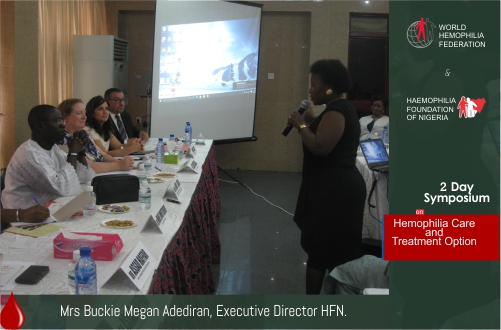 Additionally, Mrs Adediran gave a presentation on the difficulties in identifying new Haemophilia cases in Nigeria. She indicated that this was influenced by poor support from the Federal Government, low level of population awareness, poor practices by healthcare professionals and the organizations lack of resources (funds specifically) to execute activities. She concluded by saying that these factors were inter-linked and a joint effort from all stakeholders would lead to easy identification of new haemophilia cases as well as an improved quality of life for all with bleeding disorder. In response, Dr Theresa Nwagha stated that stigmatization contributes to the low level of detecting new cases associated with haemophilia, while Professor Omolade Awodu from university of Benin teaching hospital expressed her concerns about the difficulty of record keeping. 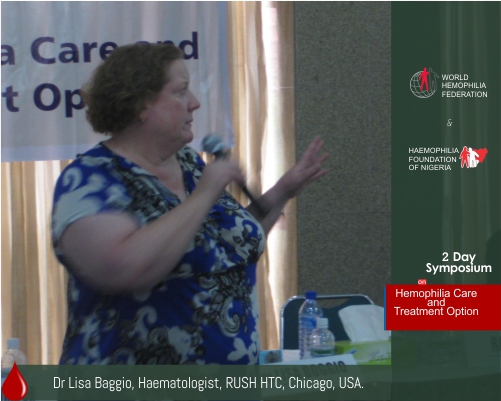 Dr Lisa Boggio talked on the principles of factor replacement therapy, giving an overview of what happens in persons with haemophilia and the various treatment approaches. She concluded by highlighting the various care and treatment therapies.

She further discussed the use of low dose prophylaxis, while emphasizing the effects of bleeding to the joints and diseases that results afterwards. Additionally, Dr Lisa underlined that the prophylaxis does not only prevent prolonged bleeding, it sums up to an improved quality of life irrespective of its cost. 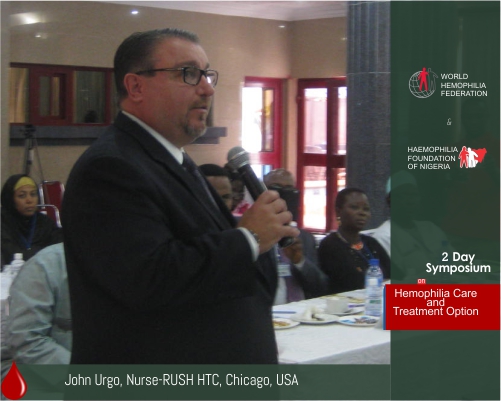 John Urgo (a registered nurse) gave a brief description on how persons could self-infuse themselves, stating what was needed and precautions.

Following this, four persons with haemophilia who have different range of joint athropathy were assessed by the Doctors and physiotherapists, with recommendations on how to manage a damaged knee. Suggestions included the need for regular exercise & the fact that prophylaxis cannot me used once a joint is damaged.

The take home at the end of the first day was the need for group work, working together to make a difference.

This site uses Akismet to reduce spam. Learn how your comment data is processed.